Of all the animal species in the Arctic – ranging in size and characteristics – there are a few that stand out from the rest and are more widely known than the others, and for good reasons too. These Arctic animals live, hunt, breed and survive in one of the most arid and uninhabitable places on Earth.

Firstly, where is the Arctic? 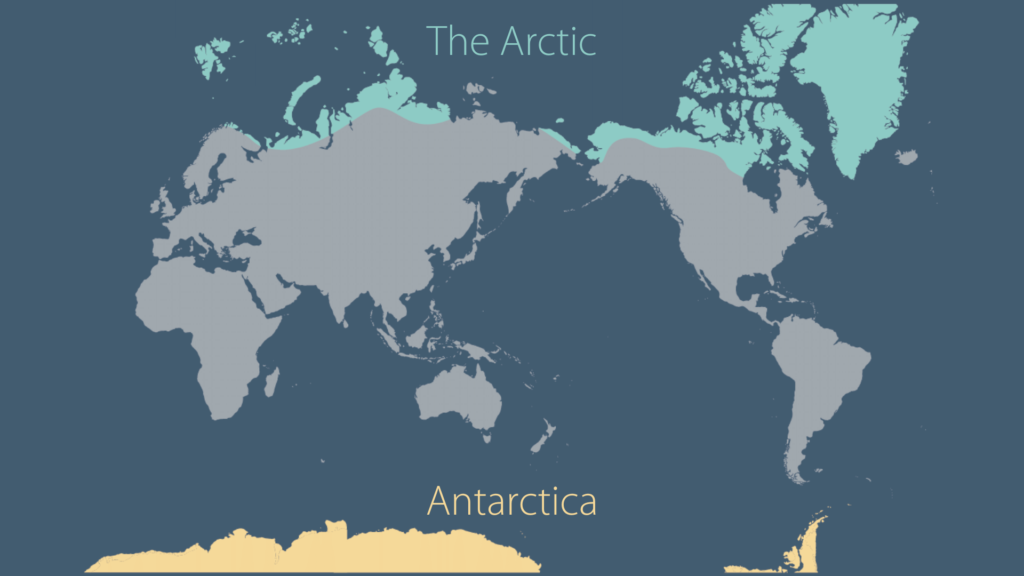 What animals live in the Arctic?

Polar bears spend most of their time on ice floes in the northern Arctic. They are the largest land carnivore in the world and also the largest of the bear family. The adult female stands at two metres tall and weighs around 150-300 kg; males stand at 2.6 metres and can with up to 700 kg. Their fur is, in fact, clear, with black skin, eyes, noses and mouths. Defining characteristics include their incredible swimming abilities, with records of polar bears swimming some 50 miles from any land or floe.

Spot the mighty Polar Bear on one of our Arctic Expeditions.

Aside from the polar bear, the musk ox is probably the most truly Arctic of the northern land mammals. It is often said to be an artefact species surviving from the late Pleistocene and the last ice age. Musk oxen have historically been associated with the hunting cultures of early mankind. Their meat and hides were used for food, clothing, and shelter, while the horns and bones were carved to make tools and crafts. The long, thick coat of the musk ox makes the animal look larger than it really is. Male musk oxen, called bulls, weigh between 181 and 409 kg, while females, or cows, normally weigh from 259 to 227 kg.

Our Arctic Complete expedition will visit East Greenland, where you can keep your eyes peeled for a few musk oxen.

Smaller, with more rounded ears than the familiar red fox, the Arctic fox is still an obvious fox. It has a shorter face with a more rounded muzzle, too. The Arctic fox is distributed all around the Arctic in high latitudes and out on the open tundra. Arctic foxes are rather small foxes weighing just 3.1 kg (female) to 3.8 kg (male). They look much larger in the winter than they really are because their thick white coats are so fluffy. They remain active all winter and live in the open.

Check out our Svalbard Odyssey or the Jewels of the Arctic because they take place July to September, just after litters of pups will have been born.

The Arctic hare is one of five species of Lagomorphs (the order that includes rabbits, hares and pikas) that live in the Arctic. It is known to have been in the Arctic since before the last ice age. Fossil remains of Lepus Arcticus are known from a 12,000-year-old Eskimo site in northern Greenland. As an adaptation to its northern existence, it is larger and more heavyset than southern hares with adults ranging from 2 to 5 kg – considerably heavier than an Arctic fox. Their fur is longer and finer than that of most temperate hares, and they have shorter ears. Because of their size, speed and fighting ability, adults have few enemies besides the wolf. Gyrfalcons, snowy owls, Arctic foxes, and ermine, however, can take young hares. Native people also hunt the Arctic hare. The Inuit consume the meat of Arctic hares and use the hide for clothing and bandages.

To encounter an Arctic Hare, learn more about our Arctic Complete and Jewels of the Arctic expeditions.

Reindeer are large animals, measuring 87–140 cm in height at the shoulder. There is marked sexual dimorphism, with males being significantly larger than females. The coat is very heavy with dense, and is predominantly brown to olive, with whitish underparts, rump and legs – some populations in Greenland have nearly white coats. Their feet are broad and flat with deeply cleft hooves. The structure of their feet allows the hooves to splay widely and act as snowshoes to travel over winter snows and the summertime spongy Arctic tundra. Reindeer are vegetarians and they eat most available types of vegetation, including new-growth leaves, lichens, evergreen leaves, and fine twigs.

Have the opportunity to see one of Santa’s little helpers on the Svalbard Odyssey or Svalbard in Depth expeditions.

Only a dozen or so species of birds can live in the Arctic all year round: the gyrfalcon, raven, ptarmigan (rock, willow and Svalbard species), snowy owl, redpolls (common and hoary), two gulls (Ross’s and ivory), three guillemots (common, black, and Brunnich’s), and the little auk. Even for these hardiest of species, most will migrate to southern portions of the Arctic during the harshest part of winter. All other species (about 100 that nest in the Arctic) migrate relatively long distances to escape the Arctic winter. View some common Arctic birdlife here.

Marvel at the diverse range of Arctic birdlife on our Jewels of Coastal UK or Ireland and Scotland Discovery  expeditions.

The walrus is the largest pinniped in the Arctic and is nearly devoid of hair. It has distinctive tusks which are used as levers to move its heavy body on land, and as weapons. They are very easily recognized for their large tusks in both males and females. Male’s tusks are usually longer and heavier than females, and males are 3 to 4 times larger than females (about 1700 kg v. 400 kg). Walruses are gregarious, and they may haul out in herds of up to several thousand individuals. They lie in close contact but continually fuss about position. During the non-breeding season, the groups are sexually segregated, and dominance is based on body size and tusk size.

There are a number of seals that live in the Arctic waters. Bearded seals are circumpolar in distribution and are permanent residents of the Arctic. They are generally found as solitary individuals in areas associated with moving pack ice, such as leads and polynyas. They maintain breathing holes in areas of thin ice by breaking through with their heads. Harp seals are one of the most famous seals in the Arctic due to the pure white coasts of the young pups. The ringed seal is the most common and most widespread seal in the Arctic. It is also the most common prey of the polar bear. It is rarely found in open water, preferring areas where the ice is firm. The density of ringed seals varies greatly with the area and the season.

Experience playful seals on our Jewels of the Arctic expedition.

Watch our Jewels of the Arctic Short Film Dive into awe-inspiring adventures in Antarctica, the Arctic and beyond in our latest brochure. Featuring 11 new itineraries and several returning favourites for both the Greg Mortimer and newest ship the Sylvia Earle.

Get our new 144-page brochure to start planning your next adventure.