In the icy depths of the Norwegian archipelago of Svalbard resides some of the most unique creatures in the animal kingdom. With its distinctive tusks and solid body, the mighty walrus is a stalwart of the Arctic, and here we’re looking into some of its fascinating features.

The walrus, or odobenus rosmarus is one of the world’s largest pinnipeds – seal-like creatures with a streamlined body and four, flippered feet. Their body is covered by leathery skin with short fur, beneath which is the blubber that allows them to survive in the icy waters of the Arctic.

Walruses can grow up to 3.5 metres long, weighing in at as much as 1.5 tonnes – almost the same as a small car!

They have no external ears, and sport whiskers by their tusk, which are actually oversize canine teeth. Measuring almost up to a metre long, these tusks grow throughout a walrus’ life, which can last up to 40 years in the wild.

Another fascinating walrus trait is the ability to slow their own heartbeat, enabling them to live in frigid Arctic conditions. 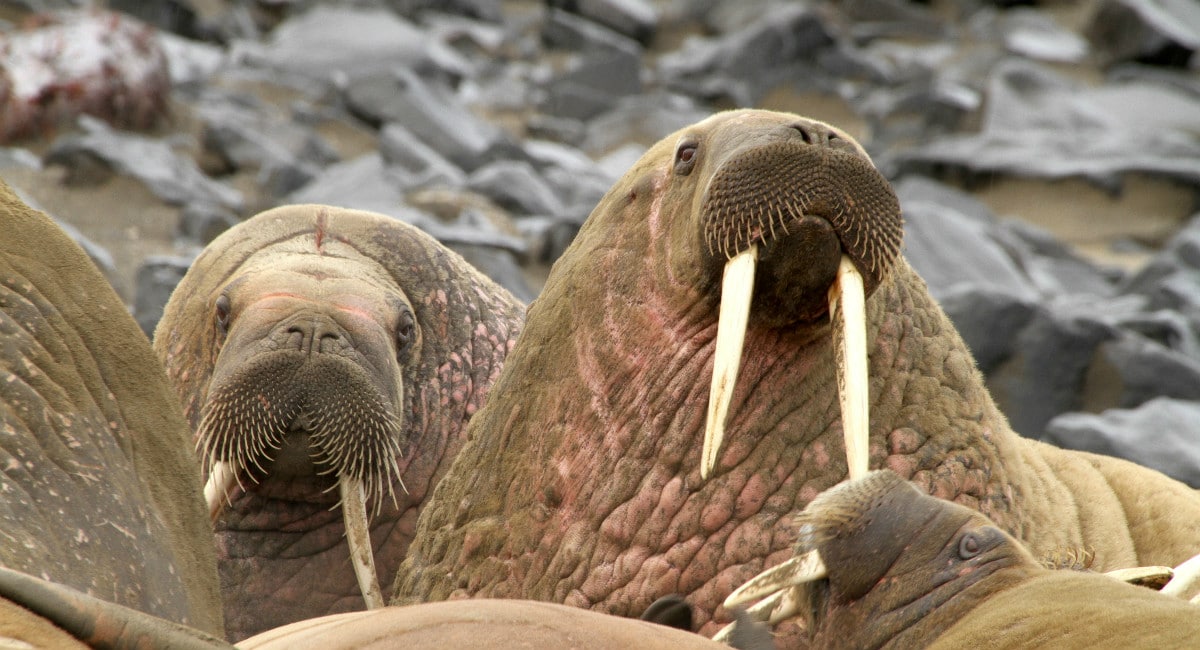 Read more: Top 10 things to see on a Spitsbergen cruise

Although walrus colonies are spread out between the Atlantic and Pacific Oceans, they are largely found in northern Atlantic regions and particularly around Svalbard – meaning you’ll have a good chance of seeing some on your Svalbard cruise!

Walruses are classified as semiaquatic animals, spending most of their lives in the sea, but they can also haul themselves onto ice pans or onto land using their strong tusks. Their scientific name, odobenus rosmarus, actually translates to ‘tooth-walking seahorse’.

These social creatures are usually found lazing about in groups, and even swimming together, however, outside of breeding season male and females tend to stick to their own respective groups. If you spot a solitary walrus, it’s likely to be lone male.

Male walruses, also known as bulls, often watch over a harem of female walruses, called cows. If another male challenger approaches, the bull will defend his harem using his impressive tusks, bellowing and roaring.

The walrus’ diet consists mainly of bivalve molluscs, which includes various types of clams and mussels. However, larger male walruses are also known to eat other mammals such as seals and bird life.

Walruses mate in the winter time, with pups being born around May. The walrus pups are mature enough to go diving after five months, but they will continue to suckle on their mother’s milk for up to three years. Once a calf walrus has been gradually weaned off their mother’s milk, they will join the larger groups of either male or females. Waddling a fine line for survival

Unfortunately, these wonderful creatures were once the target for hunters in Svalbard, who looked to profit from walrus hide, ivory and meat. After almost being hunted to extinction in the archipelago, walruses became a protected species in Norway in 1952.

The population is now slowly beginning to recover, with between 2,000-2,500 walruses believed to inhabit Svalbard. Read more: Landscapes of the Arctic

I am the walrus

As with any wildlife encounters on your Arctic Circle or Spitsbergen tour, always approach walruses with caution. They are easily spooked, and in most cases you should maintain a safe distance of at least 30 metres away.

Always listen to the direction of your tour leader, as they will know how to safely explore Svalbard without disturbing the local walrus population.

You can have the opportunity to encounter these incredible beasts for yourself on a tour of the Arctic Circle with Aurora Expeditions. To find out more about our voyages to Spitsbergen and beyond, you can take a look at our brochures online, or get in touch with our expert team.

Late Season Antarctica: Why I like Antarctic trips in March

It’s fantastic – you have the real Antarctica, and you have it all to yourself. Dr. Roger Kirkwood March is …

Arctic kayaking trips on top of the world

If you’re looking for a different type of travel experience in one of the most remote places on Earth, we …

On an adventure to Antarctica and the Subantarctic islands with Aurora Expeditions, there is one animal that almost everyone wants …