Stretching approximately 2,800 kilometres (1,750 miles) from north to south and approximately 1,000 kilometres (625 miles) from east to west, Greenland is the world’s biggest island. Some do claim that Australia is a bigger island, but according to international definitions, Australia is regarded as a continent. East Greenland is just a short flight from Iceland, but its culture and landscapes are a world away. In a land dominated by the Ice Cap and impossibly steep mountain ranges, 3,500 people have made it their home. Their culture is born from myths and legends, often expressed in bone and rock carvings, but at the same time it is a globally connected culture with strong hunting roots and an everyday spirit of adventure. Discover Scoresbysund where you can paddle and Zodiac cruise along one of the world’s longest, largest and deepest fjord systems. At Ittoqqortoormiit, visit Greenland’s most remote settlement, home to approximately 450 mostly Inuit, people.South Greenland lives up to its name as it is truly a ‘green land’. It is a land of jagged mountains and green pastures where sheep farms directly border ice fjords, and Norse settlement history intertwines with modern fishing and hunting communities. Natural hot springs on a remote island, big wall climbing, and fjord kayaking abound in South Greenland.

Greenland’s capital, Nuuk, located in West Greenland is an arctic metropolis with a small-town feel, shaped by nature and known for its cultural diversity. While Nuuk is the colourful heart of this nation, the smaller communities of Paamiut south of the capital and Kapisillit in the Nuuk Fjord, are places to kick back and spend time in the outdoors. From the Disko Bay area in central West Greenland to the polar extremes of the far north, the scale of North Greenland is hard to fathom. Along a coastline stretching thousands of miles lie small communities based on hunting and fishing, in a land ruled by the Polar Night in winter and the summer’s Midnight Sun. From the strange volcanic rocks along the hiking trails on Qeqertarsuaq, the constant flow of massive icebergs from one of the world’s fastest flowing glaciers in Ilulissat Icefjord, a UNESCO World Heritage Listed site, the diverse landscapes and superb whale and bird-watching opportunities in Disko Bay, makes West Greenland an ideal place to experience an expedition cruise.

At Aurora Expeditions, we have many Greenland cruises for you to explore Greenland in-depth, including West Greenland Explorer as voted by you! Explore the real world.

Embark on a cruise adventure to the remote coastal regions of Greenland, where you will experience a pristine natural environment that is uniquely Arctic. Situated between the Arctic and Atlantic oceans, east of the Canadian Arctic Archipelago and a part of the Arctic Circle, Greenland is an exciting destination for adventurous travellers.

Aurora Expeditions’ cruises are made for rugged explorers who are excited to experience the magic of the Greenland wilderness. Our Expedition Team provides Greenland tours for those with a keen sense of adventure and a desire to immerse themselves in the natural environment.

Previous
Next
Save up to 20% 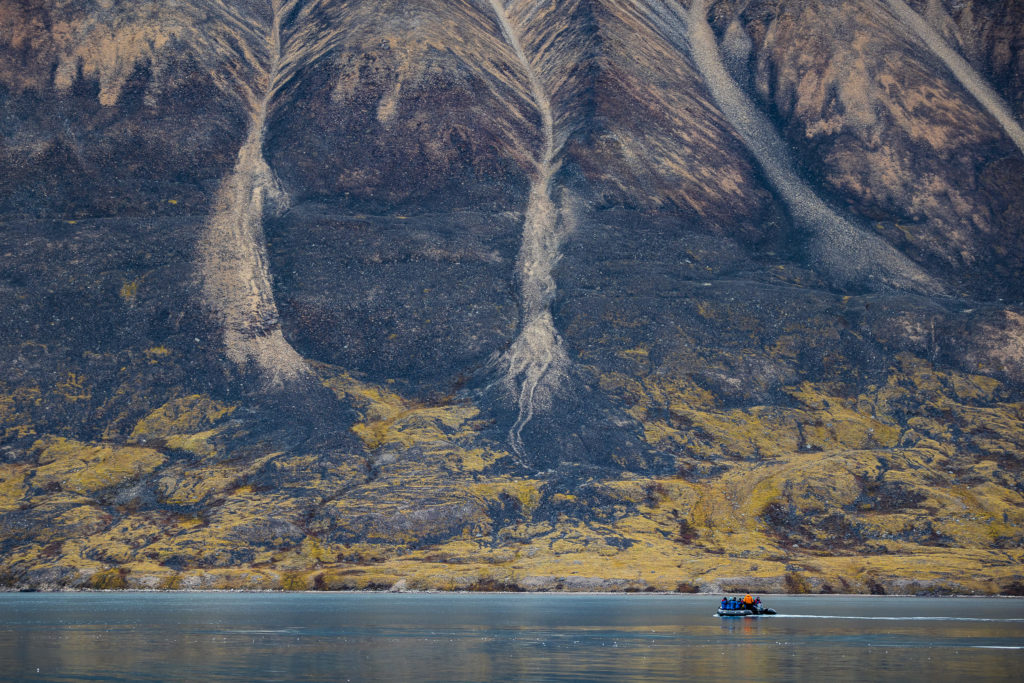 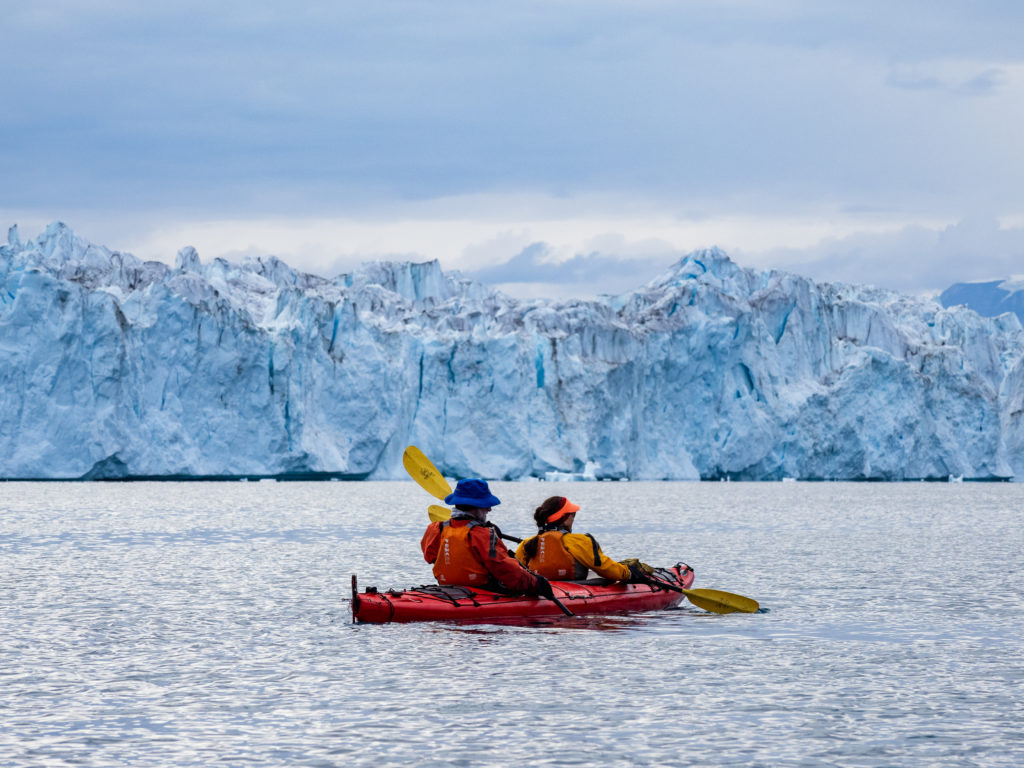 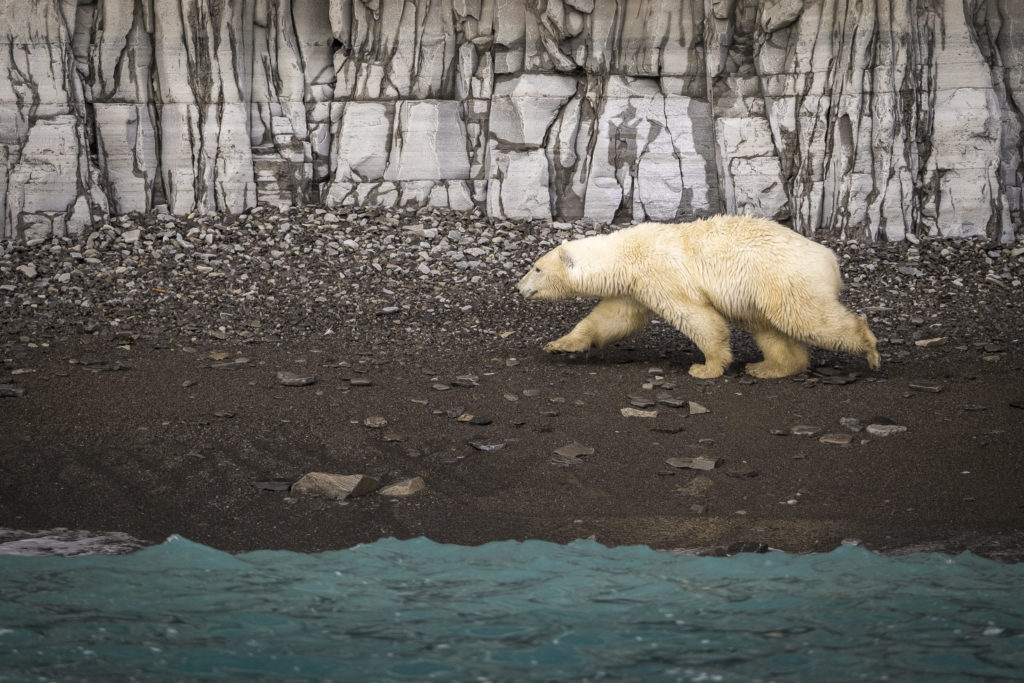 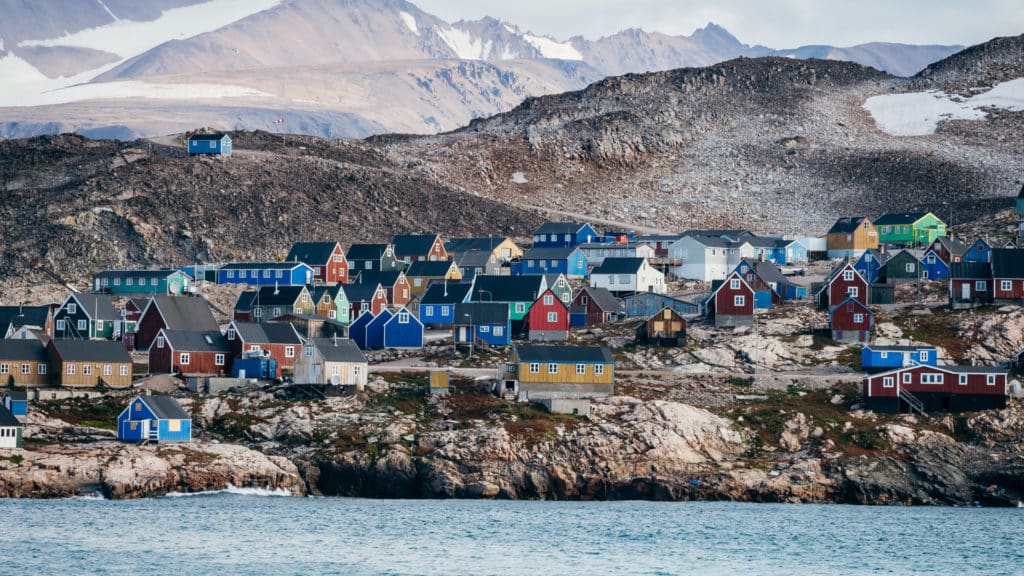 Jewels of the Arctic 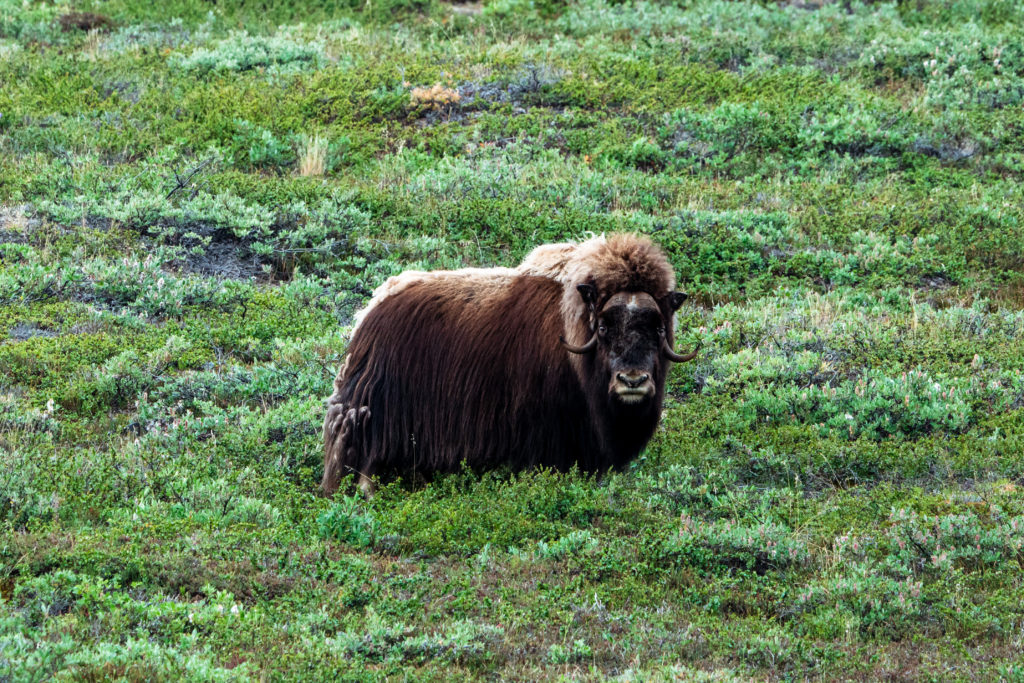 Why Join a Greenland Expedition Cruise?

As one of the best known Arctic islands, Greenland is a remarkable destination that leaves its imprint in ways not entirely explainable. Whether you’re exploring the East, West or South, our Greenland Expeditions reveal the beauty of the world’s largest island.

Many people still have misconceptions about this alluring Arctic nation. For one, despite being almost completely covered by the Greenland Ice Sheet, there is more to Greenland than glaciers and ice. It is a nation with layers of culture and history that will unfold before you. Greenland has one of the world’s smallest populations, with approximately 56,500 inhabitants. Today, 88% of Greenland’s population is Inuit (predominantly Kalaallit) or a mix of Danish and Inuit. The remaining 12% are of European descent, mainly Danish.

A trip to Greenland takes you to one of the planet’s last great wildernesses, a remote land of ice and snow. Offering remarkable landscapes, exceptional wildlife, iceberg-filled fjords, majestic peaks, vast tundra, Viking history and contemporary Inuit culture, Greenland is truly unlike anywhere else in the world. The fjords and mountains of Greenland are where life is concentrated. Summer is the best time to visit Greenland – when wildflowers are in full bloom, birds start breeding and wildlife sightings are most common. If you’re lucky you can observe bands of caribou, musk oxen, Arctic foxes and polar bears. Seals, walruses and many species of whales including humpbacks, orcas and white belugas also gather near its shores.

In Greenland, tiny, isolated communities are scattered among the fjords, accessible only by small plane (or helicopter when there is no room for a runway), boat, kayak, afoot or by dogsled in winter. Discover this fascinating country’s hidden secrets as you traverse its waters and embark on unforgettable adventures.

Greenland is a biodiversity hotspot, and wildlife encounters are expected throughout the cruise. The rugged terrain and sea ice you’ll enjoy panoramic views of throughout our Greenland Arctic expedition provide a unique habitat for the wildlife that lives here. Our Expedition Team includes onboard naturalists that will educate and guide you through your wildlife encounters both on land and at sea.

Visit Greenland on an Aurora Expeditions cruise for whale watching, opportunities to see the majestic polar bear and much more.

Being polar expeditions, our Greenland tours include truly once-in-a-lifetime experiences. A cruise in the Arctic Circle around Greenland provides a rare opportunity to take a polar plunge, embark on Zodiac cruises through the ice sheet, and observe unique geological formations and breathtaking scenery on trips ashore.

Our Greenland expedition experts can also take you on optional excursions via our comprehensive activity program. You might want to try an unforgettable journey on our sea kayaks, rock climbing the rugged cliffs of one of the national parks or scuba diving in the polar regions of the Arctic. If you would like to learn more about the included or optional activities, please contact us, we’re here to help! East Greenland is one of the most isolated areas in Greenland and offers fantastic possibilities for big adventures. In East Greenland jagged mountains rise from the sea and giant white and blue icebergs float in deep fjords. Only 120 years ago, there was no connection between West and East Greenland. Therefore, culture and traditions are different to the ones in the west and it is also why East Greenlanders speak a different language. Discover the fascinating geology of the Skaergaard Intrusion, enjoy Zodiac cruises among icebergs and hike through one-of-a-kind tundra. South Greenland travel also provides opportunities for adventure. Temperatures in southern Greenland are higher than in the rest of the country, sometimes even reaching up to 20° Celsius during summer. The landscapes are greener and the ground more fertile, with many farms along its coast. The area is full of contrasts between the green shades of the landscape and the myriad of blues that paint the ice. The region is popular for those keen on an adventure. Experience hiking tours or go kayaking to see whales and other wildlife. It is easy to take individual trips because the settlements are close to each other with great boat connections. See for yourself when you cruise Prince Christian Sound (Prins Christian Sund), flanked by imposing mountains, where the Viking ruins of Erik the Red still stand from the Middle Ages. West Greenland is the most populated region of the country, containing the nation’s capital, Nuuk, the starting point for most travellers’ on their Greenland adventures. Here, you can visit the largest ice cap in the northern hemisphere, Ilulissat Icefjord. This UNESCO-listed 55km-long natural sculpture park boasts countless jaw-dropping icebergs. Explore untamed nature on foot or from water level in a kayak or Zodiac. Stop at remote villages along the West Greenland coastline to learn about the traditional lifestyle. Historically West Greenland was known for its fishing and hunting industries, which are still an integral part of the local way of life.

West Greenland is also home to Disko Bay, a large and significant bay on the west coast, steeped in history. Its nutrient-rich waters have made it the perfect home for a wide range of species. Disko Bay is a great place for whale watching and kayaking, with a number of different species of whales visiting the bay during the springtime. Disko Bay also attracts migratory seals that use the teaming waters of the bay to feed. North Greenland is home to the harsh realities of the Arctic Islands. It’s the land of the polar nights in the winter and of the midnight sun in the summer. The midnight sun is a natural phenomenon in the Arctic Circle where the sun remains visible throughout the night and day. During the winter months however, North Greenland is one of the best places to see the Northern Lights because of the long nights, with the dark skies making the perfect backdrop to showcase the lights in all their colours. The area is also known for its dog sledding which is common amongst the locals and a fun experience for tourists.

Visit Greenland with Aurora Expeditions and our Expedition Team will take you on excursions unique to the High Arctic, fully included in the cost of your expedition. For those interested in a little extra excitement, there are optional activities* designed to get you closer to the action.  Our Greenland expeditions provide a mix of comfort and adventure; for those willing to explore this incredible Arctic destination the memories will last a lifetime.

Lecture on wildlife, our environment, history and destinations

Find out more about our activity program 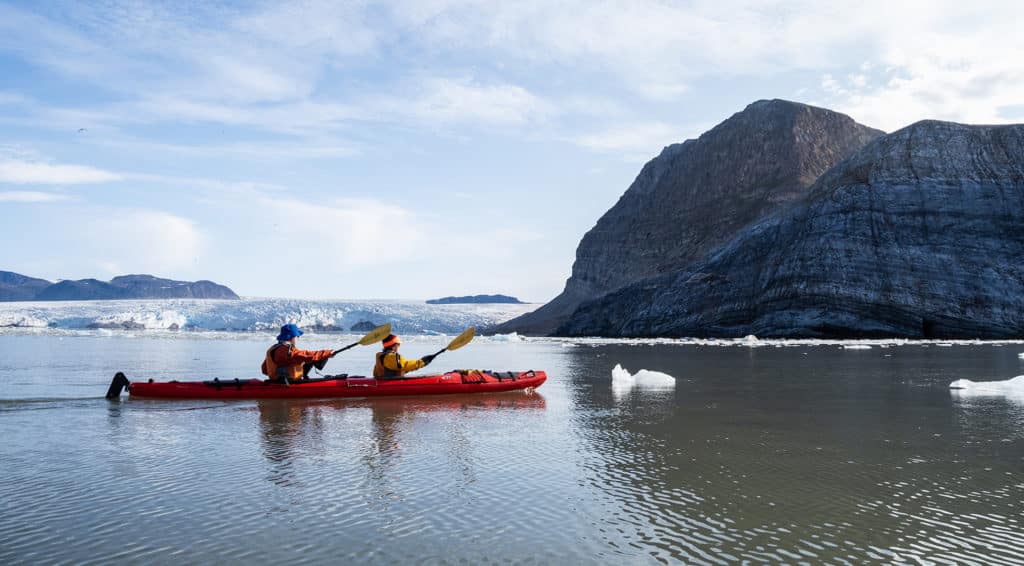 Sea Kayaking One of the most exhilarating ways to experience Antartica, the Arctic and beyond. Sea kayaking holidays in the humbling… Explore mysterious underwater worlds in Antarctica, the Arctic and beyond. Aurora Expeditions has been operating scuba diving holidays…

*Optional add-on activities are available on select voyages. They are listed on each itinerary page and additional fees apply. 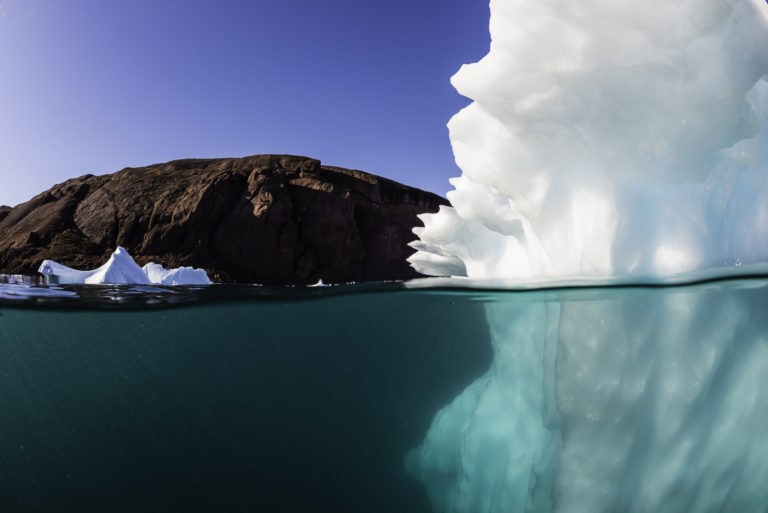 For experienced divers, a secret world awaits to be explored below the surface when you go scuba diving in Greenland, Experience the raw power of the world’s largest island when you go sea kayaking in Greenland. Explore its coastline from Where is the Arctic?

The Arctic brings to mind encounters with unique wildlife, fascinating history and living cultures, remote hikes across untracked tundra, and