Best Swimming Animals In The World

When it comes to the great wonders of the natural world, few are as vast and awe inspiring as the ocean. The ocean connects all continents and covers 71% of the earth’s surface. Home to a host of diverse marine life, our oceans contain truly remarkable ecosystems hidden in their depths.

We’ve picked out some of the ocean’s top swimmers below.

While David Boudia might have taken out gold in the 10 m dive at the 2012 Olympics, diving honours in the animal kingdom would most certainly go to the Cuvier’s beaked whale. This elusive creature holds the title for both the deepest and longest dive, as recorded in a 2014 study. One Cuvier’s beaked whale descended to a depth of almost 3 km below sea level (nearly 2 miles) in a single breath, staying underwater for 138 minutes – just over 2 hours. Rather than chasing after accolades, these whales pull off these incredible feats purely in pursuit of food.

There are a few contenders for the title of fastest fish.

The sailfish could hold its own on an Australian freeway, with a fastest recorded time of 109 km/h (68 mph). However, sailfish are sprinters. They tend to reach these high speeds in short bursts and their fastest times have been recorded while leaping. The sailfish is one contender for fastest fish with a fastest recorded time of 109 km/h (68 mph).

Like the sailfish, the swordfish is also a great sprinter and leaper, clocking impressive speeds of over 125 km/h (77 mph) while airborne.

The common dolphin (delphinus delphis) holds the title for fastest marine mammal, reaching speeds of 60 km/h (37 mph). Playful swimmers, dolphins can often be seen riding swells and ship’s wakes. They can swim fast enough to break through the surface of the water, leaping or porpoising to take a breath and build up speed.

In an Olympic sprint, the common dolphin would have some stiff competition, with the orca and Dell’s porpoise hot on their heels, reaching maximum speeds of 56 km/h (34.8 mph) and 55 km/h (34.17 mph) respectively. 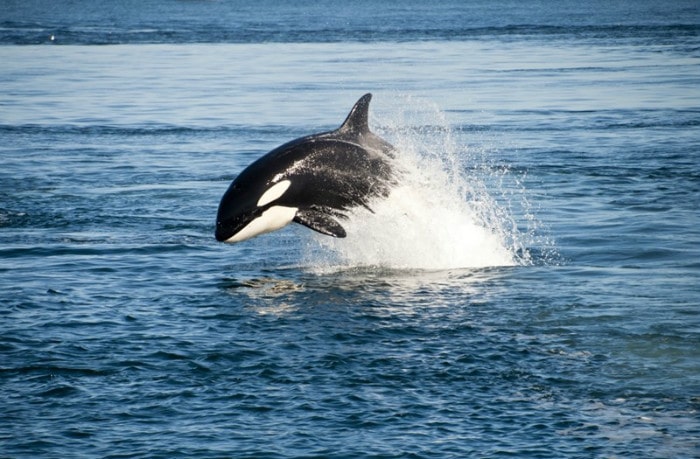 The humpback whale is the true king of long distance swimming in the ocean. In autumn and winter, humpback whales dwell in the warmer waters of the Pacific. When the seasons change they head down to feed in icy Antarctica. This is one of the world’s longest migrations with an average distance of 5000 km (3000 miles)! 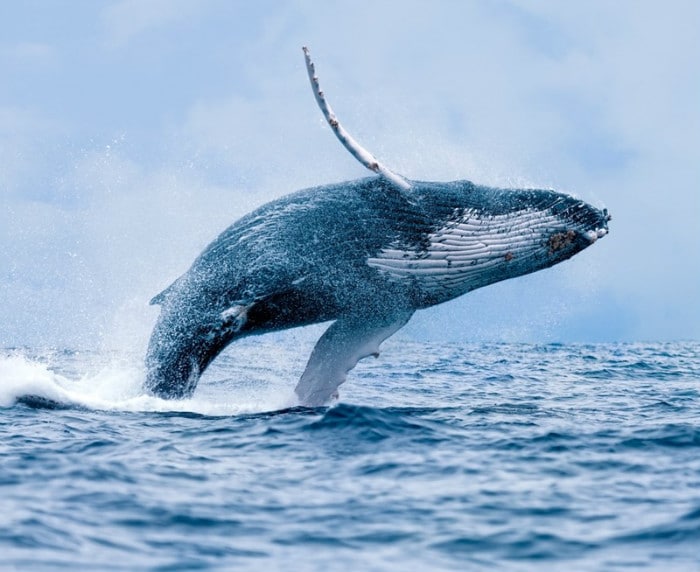 The humpback whale is one of the greatest endurance swimmers with the world’s longest migrations, travelling an average distance of 5000 km (3000 miles).

One of the most visually enthralling Olympic sports, synchronised swimming, requires skill, grace and an impeccable awareness of your fellow swimmers. While athletes train for years to reach Olympic level, there is another breed of swimmer with an innate talent for synchronisation under the sea.

Of all fish species, the Atlantic herring is renowned for demonstrating some of the most spectacular examples of schooling or shoaling. In fact, herring have even been known to form what have been called ‘mega-shoals’, containing hundreds of millions of fish moving in perfect harmony. This school of herring could give Olympic synchronised swimmers a run for their money.

Last but not least, one of the world’s most impressive swimmers is the penguin. When these land-dwelling creatures jump into the frigid waters of the Antarctic, they can dive five times deeper than human beings, baffling scientists.

The gentoo penguin holds the title for the fastest penguin swimmer. They are the fastest underwater swimmer at a speed of 36 km/h (22 mph)! Find out more about penguins in our infographic. 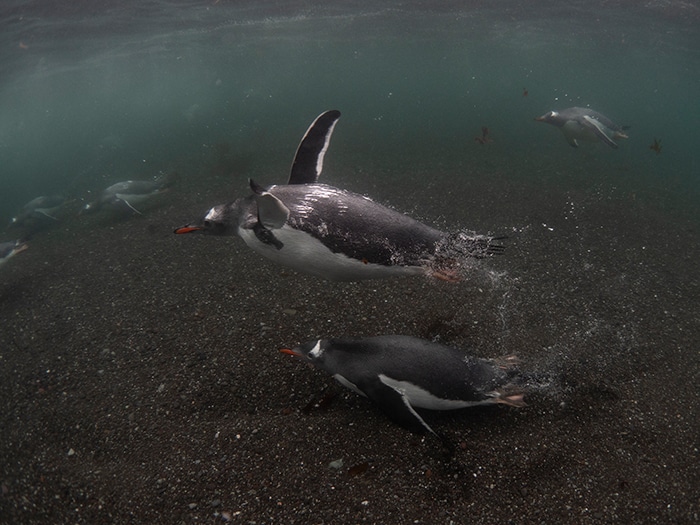 Gentoos are the fastest penguin swimmers at a speed of 36 km/h (22 mph). Photo credit: Scott Portelli

You can discover some of Antarctica‘s incredible wildlife on one of our expedition cruises. Be sure to get in touch with our expert team to learn more or download a brochure online.

On an adventure to Antarctica and the Subantarctic islands with Aurora Expeditions, there is one animal that almost everyone wants …

Spitsbergen birdlife to spot on your Arctic cruise

The isle of Spitsbergen in the Norwegian archipelago of Svalbard is one of our favourite destinations, with jaw-dropping landscapes and …