Home > Blog > Antarctica in March: Why I like Antarctic trips in March

March is ‘late-season’ for voyages to Antarctica: night times grow out of the endless summer days; the air freshens; dustings of snow can cover the land, and the sea surface can freeze with a thin crust of ice. Most other ships have left the scene so all landing sites are available. It’s fantastic – you have the real Antarctica, and you have it all to yourself.

In March, ‘winter is coming’. The melt has stopped. Snow banks swathed in pink and green snow algae will soon be covered with fresh whiteness. The hours of night close off each day so you can sleep comfortably without the midnight sun streaming in and without feeling you might miss something. Beyond March, the curtain falls. Rapidly spreading pack-ice and shorter days restrain visitation until the following October. A peace is settling, complete with magical long sunsets.

The wildlife in March is the highlight for me. It’s when you can guarantee lots of whales are about, and humpbacks are peaking in numbers. They’ve been feasting on the abundant krill all summer and by March they are loafing, getting some last meals in and generally preparing mentally for the big migration north. Most humpbacks from the Antarctic Peninsula head up the west coast of South America, to their Columbian breeding grounds. Some travel west in the Pacific, to French Polynesia. These mighty, magnificent beasts are best viewed from a Zodiac or kayak, and March is when you are most likely to get this opportunity.

In March, some of the penguin colonies are deserted. Others are still very busy. You can see many moulting adults, looking uncomfortable and irritable, and some parents bringing bellies of food, trying to get last meals into fledging chicks. There are adorable chicks moulting, moulted, and intensely curious. Gentoo chicks in March are sensational. You see chicky-chases – demanding chicks pursuing harassed-looking parents round the rocks and down to the sea. Chicks often line the shore, where they can test the waters and quickly intercept a returning parent. They know their life will continue out there somewhere, but seem a bit unsure of how to initiate the change. And leopard seals are ready to take advantage of this naivety.

Leopard seals are sleek, and possess a heart-stopping, sinister appeal. They have blocky, tyrannosaurus-like heads, wide-grinning mouths, and long, multi-pointed teeth. Mostly leopard seals eat krill. Approaching a school they’ll open their mouth, drop their tongue down their throat and suck in litres of krill soup – then push the water out through their teeth and strain off the krill. But they won’t pass up the opportunity to ambush a tasty fish, seal or penguin, and chick-fledging time is a time of plenty. Leopard seals can lazily intercept a flippering fluff ball (the chicks have difficulty submerging against their innate buoyancy), or casually pluck an inquisitive chick from the shore.

Others join the brief abundance: giant petrels, skuas, kelp gulls, even tiny storm petrels gleaning morsels of flesh or oil droplets from the sea surface. March is also the time of greatest Antarctic fur seal abundance around the Antarctic Peninsula.

South Georgia always brims with wildlife. In March, elephant seals are moulting in wallows – piled on top of one another. Plenty of frisky fur seal pups and juveniles are constantly joisting with one another and looking for trouble. Wandering albatross chicks are getting ready to fledge. And there’s an uber-abundance of king penguins.

King penguins take 13 months to get one chick over the line. Effectively, this gives them early breeders (about 40%), mid-season breeders (40%), late breeders (10%) and those taking the year off. In March, the early breeders are supporting large, shaggy-brown chicks, the mid breeders have small chicks often still on their feet, and the late birds are incubating eggs, most of which won’t survive the winter. You also have chicks from the previous summer moulting into adult plumage (often with hilarious hair-dos), moulting adults and thousands of younger birds strutting the shores, all burdening our SD cards with photo opportunities.

So, in summary, while all times have their unique and special attractions, I always give a subdued ‘YESSS’, when I hear I’ve scored a late season trip.

For more information about Antarctica in March, contact our Expedition Experts. 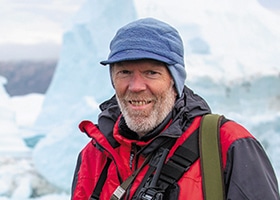 Roger has explored the polar regions for over 30 years. In 1984, Roger was a krill research assistant on a marine science expedition with the Australian Antarctic Division and returned nine more times to study zooplankton, seals, penguins and albatross. As a marine biologist, Roger has published over 100 research and public articles, two textbooks and two children’s books and is always keen to share his extensive wildlife knowledge with passengers.

Secure your spot on a March expedition today!