How Old Is Skara Brae? And Who Used To Live There? The Full Story

Home > Blog > How Old Is Skara Brae? And Who Used To Live There? The Full Story

Scotland and its many islands date back not just centuries, but millennia. No matter what the weather threw at those ancient humans, they persevered, setting up fascinating civilisations all across the nation and its neighbouring islands. You’ll get to see a piece of this heritage aboard the Polar Pioneer, our expedition ship that takes you on a magical voyage to the Arctic and sub-Arctic.

On our Wild Scotland tour in particular, you’ll find yourself exploring the ancient ruins of Skara Brae on Orkney, which have been immaculately preserved through time. Our expert guides will let you in on a little history while you’re there, but to whet your appetite before you go, read up on what we know of this small village’s story, and who used to live there.

A photo posted by James Colman (@jamescolman) on

The year is 1850. A heavy storm has just ravished a large, unassuming hill, revealing a strange village hiding beneath the sand and earth. Over the next century, researchers dove in, revealing that it was not an Iron Age settlement (circa 500 BC) as many suspected, but indeed far, far older. That’s right – on your cruise of Scotland, you can witness a place that predates even the Egyptian pyramids.

Once upon a time in Orkney

Skara Brae has been dated back to the Neolithic period, which was the last stage of the Stone Age over 5,000 years ago, according to Ancient History Encyclopaedia. The people here were going through a revolution of sorts. Agriculture was growing more prevalent, and the hunter/gatherer lifestyle was on the way out across large swathes of Europe.

Historic Scotland states that the people of Skara Brae would have been farmers, hunters and fishermen, and indeed in-built tanks of stone can be seen within the small houses here, which could have been used to prepare bait. The houses themselves are small, with a stone fireplace and box beds for sleeping. It is believed that the people who lived here were largely peaceful, as no weapons have been found and it is in a location not readily defensible.

Curious to find out for yourself? Ask about it on the Orkney leg of your Scottish expedition and see what conclusions you and your guide can come to. 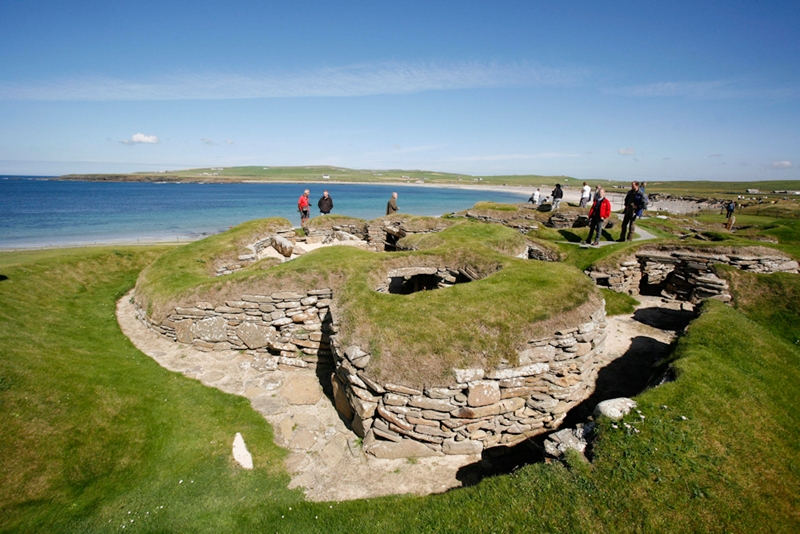 Arctic Kayaking Trips On Top Of The World

If you’re looking for a different type of travel experience in one of the most remote places on Earth, we …

The Wonders Of Wild Outdoor Scotland According To Robyn Mundy

When I was first asked to work on Aurora’s ‘Wild Islands of Scotland’ voyages, I confess to being a tad …

When you first think of Scotland, you’ll likely think of the big cities such as Edinburgh and Glasgow, as well …