Have you ever stopped to think about how amazing our oceans are? From generating the majority of the oxygen we need to breathe, to regulating our climates, cleaning our water supply and providing food and medicine, without the oceans our planet and society would look dramatically different.

However, in recent decades, the health of oceans around the globe have declined. As a result of climate change, pollution and industry trends, our once crystal-clear pristine waters have become darker and without active change will only deteriorate over time.

This is why causes such as World Oceans Day are of real importance to Aurora Expeditions. Coordinated by The Ocean Project since 2002, World Oceans Day is recognised annually on June 8 – not only a time to celebrate our oceans, but to learn about how they interact with many aspects of human life. We are all linked to the oceans and must work together to protect these vital resources for the following generations.

As part of the Svalbard Odyssey, explorers will pass through two oceans – the Arctic and Atlantic.

After launching from Longyearbyen on Spitsbergen, Norway, the Polar Pioneer heads north along its rugged west coast. As the journey rounds the northwest coast, the exploration enters the Arctic Ocean and a stunning world of pack ice and open water. Throughout the entire year, the Arctic Ocean is completely covered with ice and is only passable when the sea ice starts to break up in the summer. Of course, the Arctic Ocean is also the smallest and shallowest major ocean in the world, supporting unique birdlife and wildlife.

At the southern tip of Spitsbergen, the voyage enters the northern Atlantic Ocean. The second largest ocean in the world, it stretches between the Americas, Africa and Europe – covering around 20 per cent of the Earth’s surface. Of note is the vast temperature differences across this ocean – plunging to around -2 degrees in the polar regions and a balmy 28 degrees near the equator. 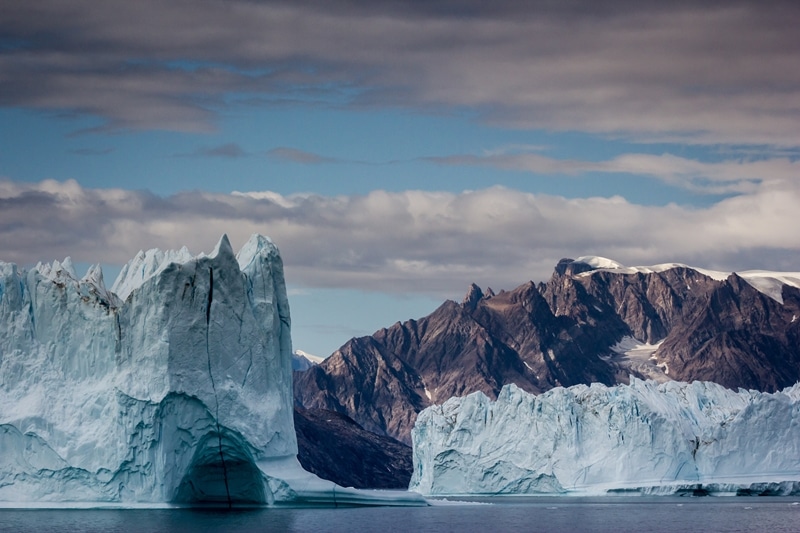 The Arctic Ocean is covered by ice throughout the year.

The Southern Ocean is home to our Antarctica expeditions with explorers either flying or sailing from South America.

Covering almost 35 million square kilometers, the Southern Ocean is the fourth-largest ocean in the world connecting Antarctica with the rest of the planet. Of course, during winter, the ocean is covered with icebergs and sea ice – with sections breaking off the Antarctic ice shelf. With climate change affecting the Antarctica and the Southern Ocean more profusely in recent years, there is no doubt that the ocean’s characteristics will change over time.

The Southern Ocean’s subantarctic islands support a wide variety of birdlife and wildlife that are endemic to the region including penguins, seals and petrels. On the edge of the Southern Ocean are flocks of Gentoo penguins.

Both Ecuador and the Galapagos Islands are influenced by the largest ocean in the world – the Pacific.

At around 170 million square kilometres, almost half (46 per cent) of the world’s water surface area is covered by the Pacific Ocean. To put this in perspective, all of Earth’s land mass is smaller than the size of the Pacific Ocean – a staggering fact that highlights how expansive the ocean truly is.

In fact, as well as Ecuador, there are no less than 54 countries that border the Pacific Ocean. This includes New Zealand, Australia, Japan, Canada, Mexico and the US.

The Galapagos Islands lie in the eastern section of the South Pacific Ocean just below the equator. As such, the diverse islands have a temperate climate, ideal for supporting unique species such as marine iguanas, Galapagos tortoise, red- and blue-footed booby and American flamingo. The warm waters of this part of the Pacific Ocean mean it is also a breeding ground for many animals such as whales, sharks, seals and birds which you can see with Aurora Expeditions. Exploring the Galapagos islands on one of Aurora Expeditions’ Ecuador adventures.

The Kimberley Coast is suited on the edge of Indian Ocean – the world’s third largest ocean.

The Indian Ocean connects 34 countries across Africa, the Middle East and Asia as well as 57 different island groups. Comparatively, the Indian Ocean has the world’s lowest oxygen out of all the oceans which makes it difficult to support life. As such, the majority of animals that call the Indian Ocean home spend much of their time around the coastline, including the Kimberley in Australia’s north.

On a Kimberley Coast journey with Aurora Expeditions, you may get the opportunity to spot humpback whales, dolphins, dugongs, sharks and crocodiles – all near the shore to make the most of the vast food supply. Stunning view of Steep Island/Raft Point on the Kimberley Coast.

The world’s oceans are certainly special – teeming with life and unique experiences. As such, take the time on June 8 to celebrate World Oceans Day with the team at Aurora Expeditions.