Uncover an underwater world that few have seen. In a wetsuit or perhaps even a drysuit, you may explore remarkable kelp forests, swim among sonorous whales, uncover historic ship-wrecks and perhaps even swim between two continents! Diving in some of the world’s wildest and remotest locations is a privilege that is reserved for the lucky few, experienced adventurers. Buddy up and be part of a small group of up to 6 divers for get ready for some unforgettable moments.

Our team of experienced dive guides have over 20 years’ diving experience and provide divers with detailed briefings and best practice procedures to ensure a safe diving experience. Your dive master will ensure Standard Safety Diving Practices are adhered to at all times.

Please return the scuba diving activity form at time of booking. If you have any queries regarding our scuba diving option, please contact our friendly Expeditions Experts or your preferred travel advisor for more information. 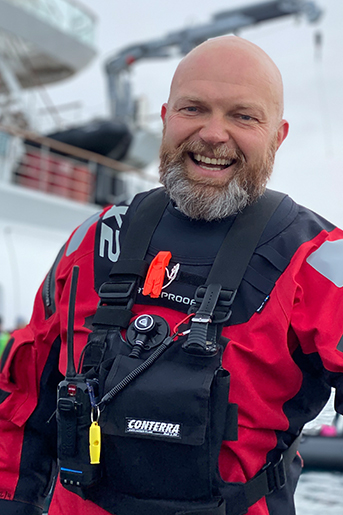 Background: Peter or ‘SCUBA Pete’ as he’s known, has a gift for training, extensive experience across all areas of diving and a passion for the sport that inspires all on the Aurora Expeditions team and our guests. He is among the top elite group of diving professionals globally and has dived on all seven continents and 32 countries to depths past 120m in all conditions and temperatures. He is an experienced polar dive guide and technical supervisor has Instructor Trainer status with six training agencies and is certified to service over 13 brands of SCUBA equipment. His sense of adventure, good humour and experience make every voyage one to remember.

Favourite Expedition: Iceland is one of my top 10 destinations in the world, of all time! I’m excited to go there with Aurora Expeditions and our guests in 2022.

Advice: Bring your sense of adventure and sign up for one of our fantastic activities. Come snorkelling with me! 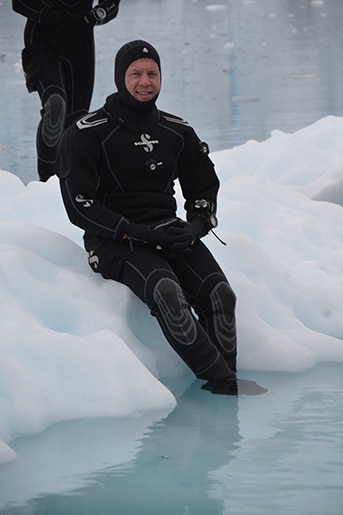 Edwin is an avid outdoor enthusiast with a passion for all activities based on, in and under water.

Edwin is an experienced polar ice diver, he holds many diving certifications with several agencies, including: Divemaster, Master Scuba Diver, deep diver and extended range river, rescue diver, gas blender, Trimix, DPV, and emergency oxygen provider. Edwin has been a certified diver since 1986 and has dived in the polar regions with Aurora Expeditions aboard the Polar Pioneer, where his love affair with the polar regions started.

Outside his passion for water activities, Edwin is also a helicopter pilot and an entrepreneur. He has successfully started and managed several start-up companies from inception to multinational status. Edwin has a Master’s degree in Management from Macquarie University in Sydney and has worked in the commercial lighting industry for over 30 years. Originally from the North East of England, he began diving whilst studying for his degree.

On a trip to see his sister who was working in the Arabian Gulf, he decided that the expatriate life was for him, and it took him 25 years to get home!

He freely admits to not being able to ”walk past a puddle without wanting to get in it and see what’s at the bottom of it” and thinks the Polar regions are one of the best places on Earth to do it.

Martin now lives in Sydney, Australia, where he can be found teaching diving, as well as supervising divers (and penguins) at Sydney’s world-famous Taronga Zoo.

He has completed more than 10,000 dives in a career lasting over 30 years.

He is a PADI Master Instructor, a BSAC Advanced Instructor and a commercial diver, working as a Safety and Rescue Supervisor for the BBC Natural History Unit and TV Production companies.

He has instructor ratings in more than 16 specialities and is also a qualified cox’n with sea survival and VHF qualifications.

He is an emergency first response instructor trainer and scuba technician.