Best Wild Places to Visit & When

Be inspired by our world-class Expedition Team’s picks of the best bucket list destinations, experiences and unique activities for adventure seekers to set your sights on in 2023. Discover the joy of some of the wildest and most pristine places on the planet, and travel with a positive impact.

We hope you use this guide to stop daydreaming and start planning your next meaningful adventure, whether it’s one of our classic expeditions, new discovery voyages or immersive treks, or another once-in-a-lifetime experience on your travel bucket list. After all, it won’t check itself off! From the rugged and remote polar regions to hand-picked destinations around the globe, we leave no stone uncovered in this informative and inspirational guide.
View Bucket List e-book
NEW
JANUARY

Best time for sun-kissed adventures around the globe

Best time for bird watching in the Arctic

Best time to sightsee from above in Greenland

Best time to spot endemic wildlife in the Arctic

Best time to celebrate in Antarctica

With world-famous national parks, turquoise lakes, curious wildlife and vast glaciers, Patagonia should be at the top of any active traveler’s bucket list. Summer is peak season in Patagonia, with up to 18 hours of daylight for travelers to enjoy outdoor pursuits. The best way to experience Patagonia is on foot, on a guided trek that takes you into the heart of this breathtaking natural playground. Imagine traversing pristine beech forests and being alone with your thoughts on wind-swept plains that stretch for miles. Feel humbled by gigantic calving glacier fronts while eagles and condors circle granite peaks overhead.

With most of Antarctica’s unique wildlife calling the icy waters home, and a whopping 90% of icebergs being tucked away below the surface, experienced divers should jump at the opportunity to scuba dive in Antarctica. Encounter immeasurable ice structures that shapeshift and play tricks on you in different angles of light. Be awed by icebergs that extend beyond the reach of any human, and curious marine life that thrives in its icy depths. February is the best time to experience Antarctica’s icy waters, as sea ice has retreated to the maximum level and a world of breathtaking ice is exposed.

In summer, whales flock to Antarctic waters in astonishing numbers to gorge on Antarctic krill, which flourishes in sea ice. Then, much like humans, after spending the summer months fattening up, they are ready to burn off excess fuel come March. With species including humpback, orca and minke whales at their most playful, this makes March the best time to enjoy unforgettable encounters with these gentle giants. Most expedition ships have left the scene by this time, so you will feel like you have the whole peninsula to yourself. You can even opt to fly over the Drake Passage to maximize your time there, or fly one way and sail the other way for a more traditional experience. Read more about why we love late season Antarctica.

Best time for sun-kissed adventures around the globe

Flock to the magical Azores islands that dot the Atlantic, where you can revel in striking coastal and mountain scenery on guided hikes. Discover lake-filled calderas, immerse yourself in culture in charming seaside villages and keep watch for abundant marine wildlife. In April the Azores boasts warm weather and sun-filled days, making it the best time to visit. Across the sea, Costa Rica is a delight for active adventurers with spectacular marine life and pristine rainforests with colorful plants, birds, monkeys and sloths. Hike through tropical rainforests, witness underwater panoramas on snorkeling and scuba diving excursions, and paddle amongst acrobatic dolphins. Experience Costa Rica at the end of the dry season when the crowds have returned home.

Year after year, travelers return to the United Kingdom for its historic castles, ancient ruins, dazzling coastlines and unique cultures and traditions. Visit Cornwall, home to iconic coastal villages like Fowey, with its strong Celtic connections and maritime history. Another hidden gem is Penzance, which can be explored on a walking tour. Be transported to a time when pirates and smugglers where aplenty. In May, witness the countryside in full bloom and visit towns and attractions before they become overrun with tourists. Discover the top 5 experiences on our Jewels of Coastal UK expedition.

Best time for bird watching in the Arctic

The Arctic’s long summer days attract millions of migratory birds, making it a dream destination for keen birders. By June, rocky cliffs all over the Arctic are alive with the cacophony of bird chatter from Atlantic puffins, northern Fulmars, Brunich’s and black guillemots, little auks, common elders, glaucous gulls, kittewakes and Arctic terns. Other species including ptarmigan, sandpipers and waders head for the lush Arctic tundra, while snow buntings, great and Arctic skuas, red-throated divers, geese, phalaropes, long-tailed ducks and eiders choose magnificent tarns as their summer homes. Zodiac-cruise under towering cliffs or embark on a guided hike with an ornithologist who will help you identify different species.

Best time to sightsee from above in Greenland

Experienced climbers will relish exploring the remote and rugged summits of East Greenland, with an experienced guide. Scale sheer granite cliffs and glacial remnants in pursuit of breathtaking views of Scoresbysund’s ice-filled fjords. The rest can follow along at sea level. In the world’s largest fjord system, views from a kayak are just as impressive. In July, Greenland’s rugged coastline is ripe for exploration, with its many secrets having been locked in place by drift ice for up to eight months.

Best time to spot endemic wildlife in the Arctic

By August, the Midnight Sun is at its peak, and there is ample time to search for iconic Arctic wildlife. July is the best time to spot the elusive polar bear, when they spend the long days prowling for food on ice sheets along the far northern coastlines. Arctic foxes start giving birth in July – their fluffy pups are guaranteed to melt the coldest heart! Arctic foxes are often found near polar bears, so bargain hunters will appreciate the chance to snag a 2-for-1 deal. In August, you can also find walruses lounging on shorelines across the Arctic, segregated into sexes until mating season starts in December.

ITINERARY PICK: Jewels of the Arctic

By September, the nights in the Northern Hemisphere are starting to lengthen. As the night falls, look skywards hoping to catch a surreal light display of vibrant hues of blue, green, pink and violet dancing across the sky. Head to destinations skirting the coastline of the Arctic Circle, such as northern Norway, Iceland and Greenland, to maximize your chances of witnessing the natural phenomenon of the of the dazzling auora borealis.

Best time for skiing or snowboarding in Antarctica

Be among the first visitors to welcome a fresh new season in Antarctica. By October, the pristine slopes are ready for first tracks by skiers and snowboarders, but first you must earn your turns by skinning up the mountain. Move higher up the slope, breaking new trails and dreaming about the sweet descent to come. As you begin your run, the iceberg-filled Antarctic waters will come back into view. Whether you’re a backcountry pro or an experienced resort skier seeking your first touring adventure, Antarctica offers a whole new world of ski and board possibilities.

Nicknamed the Galapagos of the Southern Ocean, November in South Georgia attracts the eyes and cameras of wildlife lovers from all over the globe. King penguin rookeries are nearing their peak, young seal pups are raising their heads for the first time, and mighty male elephant seals may be spotted battling it out for supremacy. November is the best month to spot the wandering albatross, with the largest wingspan of any bird in the world, stretching up to 3.5 metres across. Need some photography tips along the way? The onboard professional photographer can offer technical tips to help you improve your photography skills.

Best time to celebrate in Antarctica

Summer is well and truly in the air come December in Antarctica, with penguin colonies at their liveliest and mothers showing off their young. However, hatchings are not the only reason to celebrate! Experience the ultimate white Christmas that you are guaranteed to remember for a lifetime, surrounded by loved ones and like-minded travelers that have become lifelong friends. Enjoy a traditional Christmas lunch, but be prepared to drop your cutlery if your Expedition Leader announces a pod of whales ahead or other unforgettable gifts from Mother Nature.

ITINERARY PICK: Across the Antarctic Circle 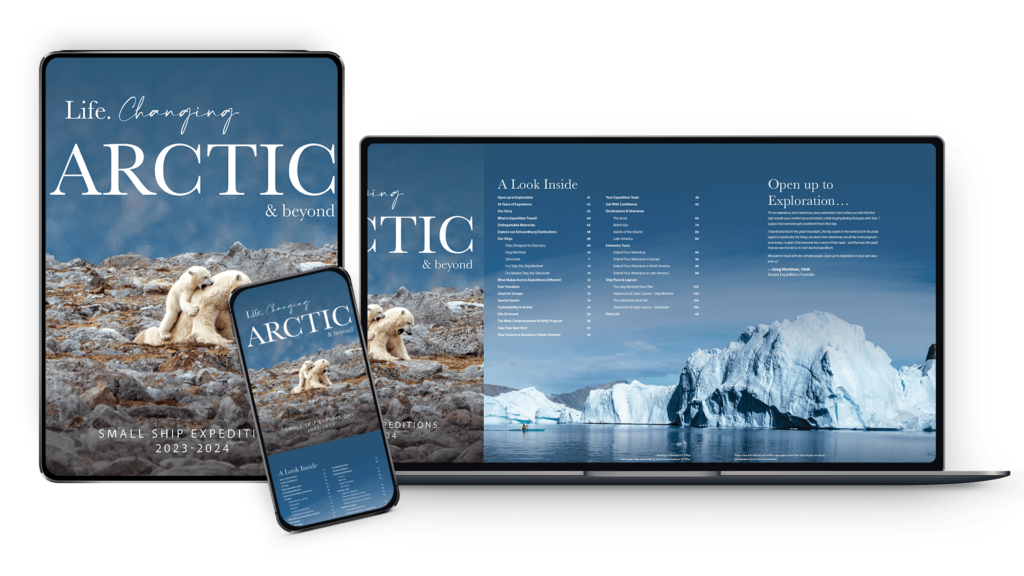 Explore our brand-new Arctic & Global 2024 season, full of life changing adventures across the wildest and most remote destinations around the globe.  Featuring 15 departures exploring the Arctic and 3 voyages to our global destinations.

Dive into our new 112-page brochure to go on your next life-changing adventure.